Koi fish tattoo – the meaning behind the symbol

It is very human start seeing things when they concern yourself personally. Once you got a girlfriend you start seeing people walking cheek by cheek but you don’t envy them this time. When you buy a car you are absolutely aghast that the 60% of the population of the town drives the same model. Well, the same goes for the tattoos. When I got my first tattoo I started spotting inked people and stare at their tattoos. That’s how I have noticed that some of them are inked with carps aka koi fish. I found it very silly because in my country the word for carp “sharan” is homophone for a schmuck or person who is very naïve and light minded. It is very easy for us to stereotype the others. Being a curious lad I have decided to do some research on koi and what they mean and symbolize.

The word koi comes from Japanese, simply meaning “carp.” It is a homophone for another word that means “affection” or “love”; koi are therefore symbols of love and friendship in Japan.

One of the primary reasons the fish is symbolic in Japanese culture is because it is known for swimming upstream no matter what the conditions are. These fish are even said to swim up waterfalls.

Some of the most common meanings are: In both Chinese and Japanese tradition, koi fish are known for swimming upstream. No matter the weather conditions, no matter how hard or steep it may be, no matter how many waterfalls – the koi fish will swim upstream. This is viewed as an absolute show of power because they will continue to swim upstream as if on a mission. They cannot be distracted or deterred by anything.

It is rare to see a fish swim upstream. When faced with adversity, most fish will “go with the flow” and follow the stream. Koi do not do this. As a result, they are seen as a symbol of non-conformity. The fish is portrayed as a living being who will follow the beat of his own drum no matter how much outside noise he hears.

Old mythology dictates that when a koi fish is taken out of the water, he does not flutter around in the manner most fish do. Instead, he moves very little and accepts anything that is given to him. Koi fish also will not move when placed on a cutting board. This is seen by many people as a sign of absolute bravery in the face of defeat because other fish would put up a fight.

While there may not be many reasons for it, many associate this fish with luck and good fortune. Many restaurants keep the fish around their front entrance in hope of blessing their stores with customers and, as a result, fortune.

In Asian cultures, women are typically not viewed as equals with men the way they are in the Western ones. For this reason, the fish is associated with the “stronger” of the two sexes in those cultures. Koi often symbolizes a person’s aspirations to improve themselves. A Koi tattoo is often chosen by those that want to showcase their personal strength or perseverance through difficult situations. Those that have high expectations for their life also tend to get koi tattoos as well people who realize that our life is fool of achievements and struggling- they tattoo up and down oriented carps on their arms. There are a variety of meanings for koi fish tattoos that are less common than those for the traditional orange-gold koi fish. There may also be different meanings for fish that are swimming in different directions. These meanings will be addressed later in the article. 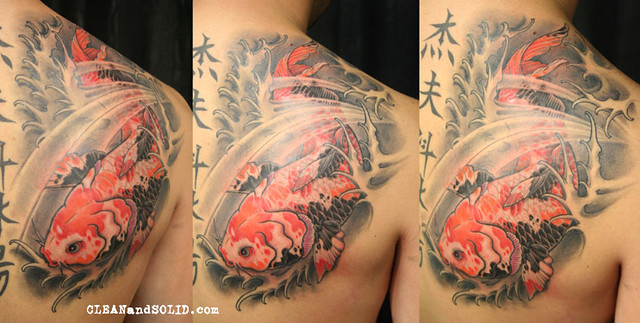 Red koi often represent love, which is typically expressed in a strong or masculine nature. Red is considered very energetic so this is often considered one of the strongest of contemporary koi tattoos. 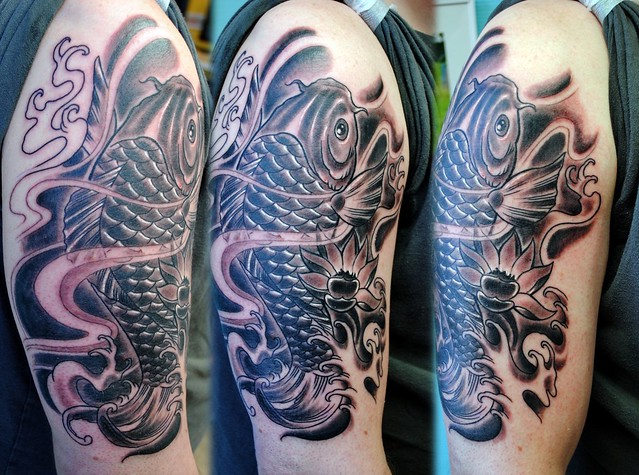 Black koi often represent overcoming a major change with success. This change often comes with adversity or pain, but this person overcame these challenges to get back to the place where they are now. 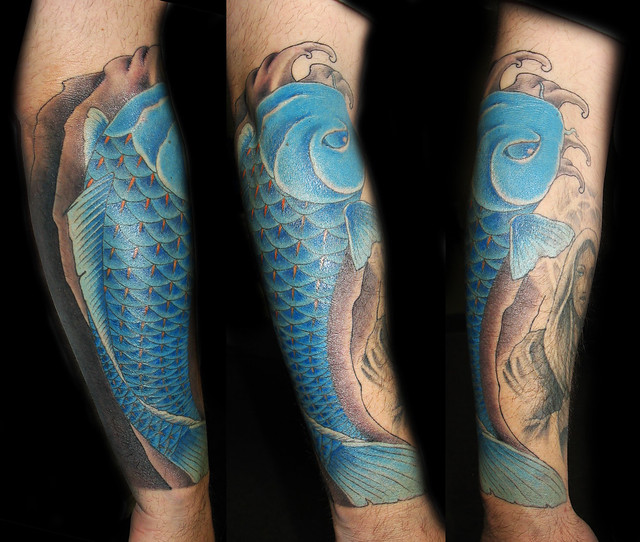 Dragon koi tattoos symbolize overcoming obstacles because this type of koi fish swims up the Yellow river and then is said to transform into a dragon. Overcoming adversity is represented in this tattoo by the strong river and the fish moving to fulfill its destiny and reach its goal, a common message in koi tattoos.

Dragon koi tattoos also symbolize strength and will, the urge to go against the odds to meet their destiny. Dragons can represent ferocity and power, along with an aura of mystery. They may symbolize rebirth or a new beginning. Those that have been through a divorce or bereavement will use this tattoo to symbolize a new chapter in their life. 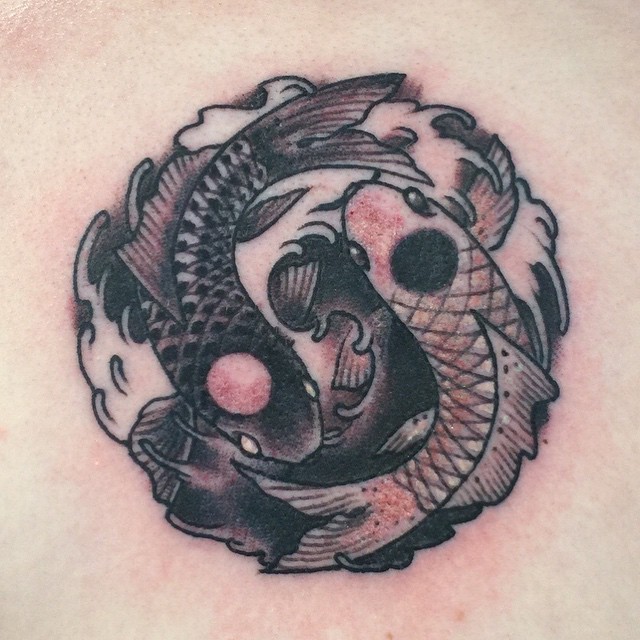 Yin and yang represent balance and the belief that all things are connected. Ying yang koi may also represent the zodiac sign Pisces. 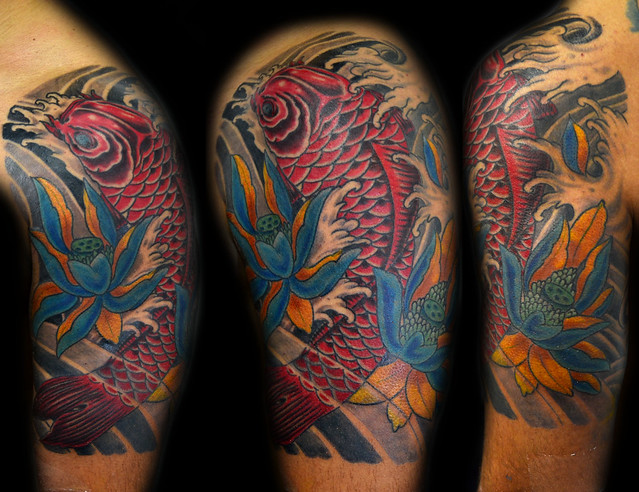 Lotus flowers are commonly depicted in tattoos. These flowers grow in a muddy pond but develop into a beautiful flower which is much loved. The lotus is often paired with a koi which can take on a variety of meanings. This tattoo may represent purity, struggle or a change in life. The lotus with the koi may also represent struggle, determination or inevitable success.

The koi legend has become a symbol for modern people that made it through tough times. People that have had to overcome obstacles may use the koi as a symbol for the luck or bravery that got them through. These stories represent those that have fought adversity such as surviving cancer or becoming sober. They can use this fish as their personal symbol to represent their success.

Those that have had a tough life but have made it through to a stable time can use the koi fish as a way to symbolize their success. These stories are all linked by the idea that these people have battled themselves, tough situations or other people to get where they are today, just like the koi fish of legend:

Many years ago, in a time before recorded history, a huge school containing thousands of koi swam up the Yellow River. The colors of their well muscled bodies flashed in the sunlight making them seem like a million living jewels.All was going well until the koi reached a waterfall. Immediately, a large number of them grew discouraged and turned back, finding it much easier to simply go with the flow of the river.   Yet, a determined group stayed on. Straining and leaping, each koi strove to reach the top of the falls. Again and again they flung their bodies into the air only to fall back into the water. All this splashing noise drew the attention of the local demons who laughed at the efforts of the struggling koi. Adding to their misery, the demons sadistically increased the height of the falls. Still the koi refused give up!   Undeterred, the koi continued their efforts for one hundred years. At last, with one heroic leap, a single koi reached the top of the falls. The God’s smiled down in approval and transformed the exhausted koi into a shining golden dragon. He joyfully spends his days chasing pearls of wisdom across the skies of the vast and eternal heavens. Whenever another koi finds the strength and courage to leap up the falls, he or she too becomes a heavenly dragon.   The falls have become know as the Dragon’s Gate and, because of their endurance and perseverance, koi have become symbolic of overcoming adversity and fulfilling one’s destiny.
There is another nice legend about a variegated butterfly flying lightly over the river when a koi suddenly jumped from the river and swallowed her for a yummy breakfast. That’s why many of koi are so colorful.

When my daughter was a little naughty devil after every fairy tale I read her before going to bed I used to ask her: What is the moral of the story, sweetheart?

So, guys what is it in our story?

I believe is: Don’t judge people by their tattoos but by their deeds.

We use cookies to ensure that we give you the best experience on our website. If you continue to use this site we will assume that you are happy with it.Ok